Hit enter to search or ESC to close

When the Tailwind Group creative team first sat down with the University of Surrey (back in October 2018) it was clear they were looking for a fresh take on how to tell graduate stories. They wanted to showcase a series of stories to build awareness of Surrey and studying in the UK. Essentially, these videos had to be unique and leave a lasting impact. When developing the creative for this project our core driver was ‘real people and real stories’ which focused on the human element of packing your life up and studying somewhere completely alien. From the outset we wanted the viewers to get a real sense of this, we wanted them to taste what life was like at the University of Surrey and hear about the achievements graduates have made post study.

So our team got to work, the first video in this series was to focus on Holly who graduated from Surrey in 2018, to tell her story from growing up playing Xbox as child, choosing move from America to England to study at Surrey, and ending up with her now working for Microsoft. The film was to be shared across multiple channels including websites, social networks including paid advertising, email communications and shown at recruitment events worldwide.

Our focus from the initial outset was to create a creative concept that would form an emotional engagement with the viewer that would both inspire and motivate their target audience. With the film following a 4 year journey, we were aware that we needed a way of showcasing key memories in a way that felt grounded and natural. To convey this in a way that didn’t take the viewer out of the film, we asked the graduate to provide us with as many photographs from her journey as she could, this ranged from her as child through to her at university and graduation. We then chose to physically print and film these in locations relevant to each photograph, an example of this was selfies she took with her friends in the campus nightclub – this allowed us to bring the photograph into the nightclub location and really make it come to life. Audio is often the most powerful tool to create emotional impact, so we focused on ways to create an audiosensory experience that would push sfx to the front of the mix, and with this in mind we decided to cover the majority of the film with b-roll footage to allow us more scope for implementing this. 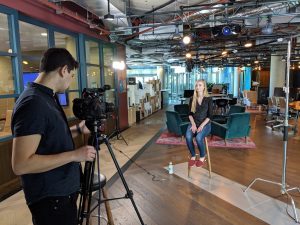 With the physical photographs in locations, combined with relevant audio these shots helped to really bring the story to life and drive the pace of the film. Due to the breadth of her journey, the video also required breathing room – a few seconds here and there for the viewer to take in the music, imagery and tone of voice. These elements were vital components in engaging the viewer’s emotional interest and allowed us to inject moments of pace that ultimately pushed further our concept of combining narrative, visuals and audio.

The shoot took place over 4 days, initially filming at Holly’s home where Holly’s dad flew from America to London to tell us about Holly’s childhood, growing up, and her journey of moving to the UK to pursue her dream. This interview, in particular, was pivotal to adding a layer of emotion to the story.

We then visited the Microsoft Head Office in London to see Holly in her work environment and to hear from her previous and current managers along with her friends and colleagues to really give an insight as to what it meant for her to get the job and how she impacts the Microsoft team. Finally we visited the University of Surrey campus to talk to her previous lecturers and Holly herself to find out about what university life is like, and what her course entailed.

The post-production ran throughout January 2019 and saw the main film produced, accompanied by 5 smaller films that supplement the website content, each one expanding on the main chapters of her journey. This was also followed by creating a 60 second and 7 second advert for promotion on Instagram and Facebook.

Watch the main film below, or head over to www.surreystories.co.uk to view the full suite of films for Holly’s Story.

“Working with Rob and the Tailwind Group team was a fantastic experience - one I would happily repeat. The team were very personable and quickly made me feel comfortable in front of the camera. Throughout the entire process, Rob was considerate of my time and worked to minimise disruption to my day and workplace. He was very proactive in his communications and specific in his interview requests which meant that filming days ran smoothly according to our timeline and achieved our objectives.

Post-filming, they kept me up to date with how the editing was going and the release time frame. I felt informed at all times and knew that Rob was only ever a quick message away. The whole process was very professional, and it was clear that both he and his team had experience working with large companies and ensuring all protocol was followed. I was absolutely ecstatic when I saw the final product. It was beautifully edited, told a clear story, and, honestly, is something I will treasure for the rest of my life. I am so thankful that I got to work with such a talented and friendly set of people for such a personal project.”

Achieve more with tailwind. Get in Touch